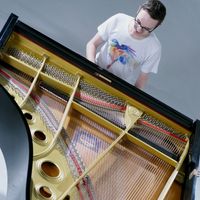 From the recording Dear Malcolm Turnbull

Dear Malcolm, I bet you’re pretty content
I bet you’re kicking back with a glass of rosé.
I know you had a small dilemma hanging over your head
And you must be glad now it’s out of the way.

Oh, I know it must be hard to lead the government of Australia
When some aren’t comfortable with loving couples who have matching genitalia
And I know you’re trying to do what’s best
To advance your own self-interest:
Stay in power for at least another day

Well, Malcolm, please forgive me if I sound a bit irate
But messing with the tenets of our democratic state
Is a high price to pay – I’d put down that rosé
Listen up, ‘cause I think you can find another way:

We don’t need a plebiscite
To bestow a human right
Malcs, I know, there’s pressure on your right
But even so, this isn’t right.

I wonder, would your position change
If you exchanged places with someone LGBTQI or A?
In schoolyards and churches our youth are besmirched
By a system that hurts through casual slurs, thoughtless words
‘Till they learn to internalise shame, wear the blame,
Believe their love is a sin, sign of the devil within
Well, I can’t begin to imagine the further hurt this will cause
To be having this discourse not behind closed doors.
These are our lives you’re dragging through the media
Our families, our partners, our pride – is it easier
To haul us through hate just to hang onto power
Than fulfil your mandate, you intimidated coward?

Did we hold a plebiscite
To give women the voting right
Or end policies of racism and hate?
No, we didn’t wait – why debate

Through a plebiscite
If the hurt and disadvantaged might
Be human after all?
It is insulting and appalling
And, Malcolm, we all know you’re stalling
Just doing what’s fucking right.

But if you’re gonna hold a plebiscite
Then I’m gonna rally, march and fight
‘Till I know I can hold my partner’s hand
Without a sense of fear.

And one day we will stand as man and man
When the dust from your government’s swept up, and
The whole world will only wonder
What it is we had to fight to stand right here.

So I’ll vote ‘yes’ in your plebiscite
Though it’s one more blow unto our plight
We’ve suffered so much more and this isn’t the end
If you think we’re weak, then think again.

From your plebiscite
Though the concept of it isn't right
We won't be fazed by hate and heartlessness
So even though it's wrong, we will vote 'yes'

In your plebiscite
Malcolm, you psychophantic parasite
We're stronger than your party might expect
Even though it's wrong, we will vote 'yes'